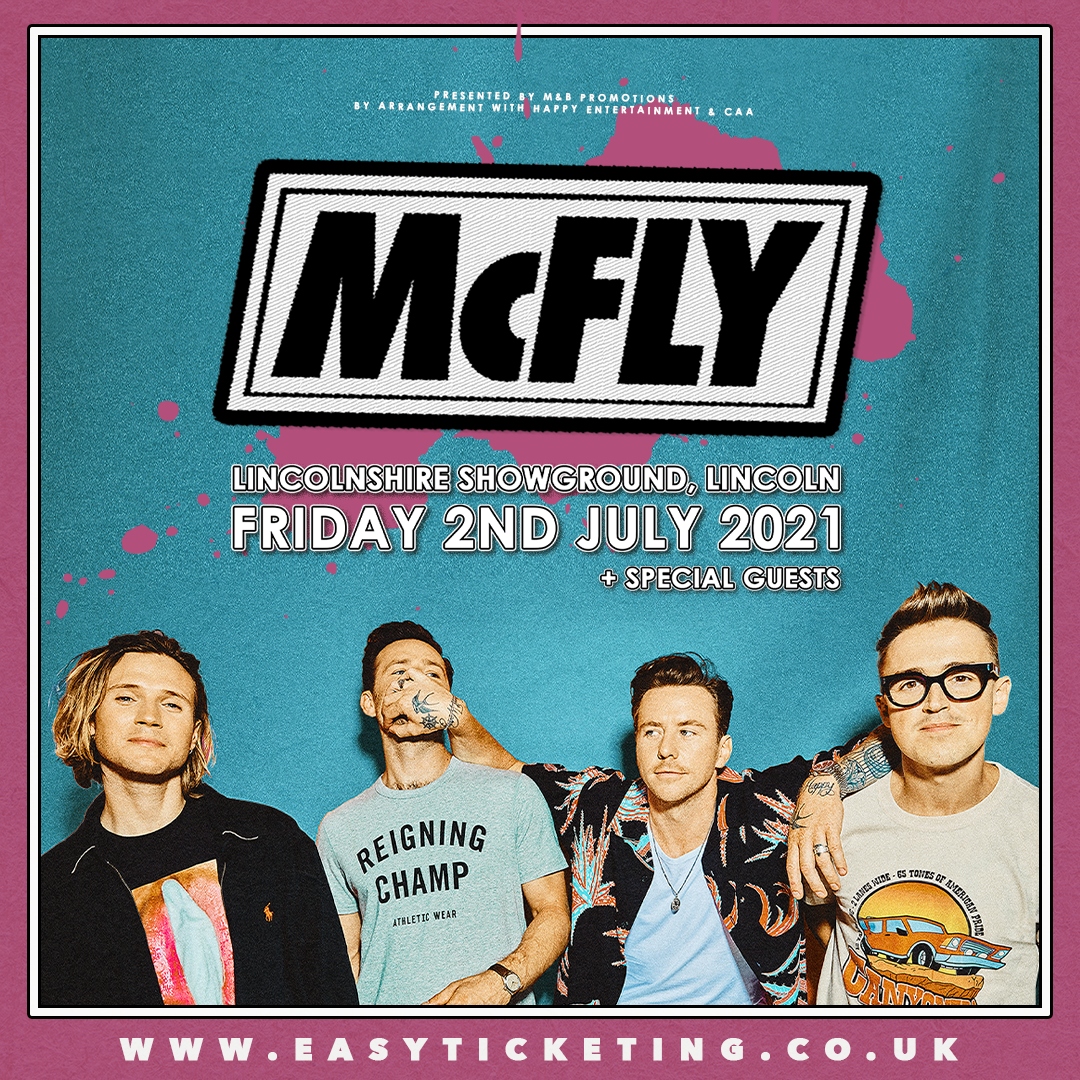 Pop royalty McFly to headline an incredible concert in Lincolnshire

Pop legends McFly bring their hands-in-the-air rock and pop to Lincoln this summer, with a special guest and an iconic band.

Marking the momentous return of live music promoters are preparing to unleash the ultimate summer party at Lincolnshire Showground on 2nd July 2021.

After selling out their reunion show at The O2 Arena in London in 2019, McFly are back on the road in 2021. Dougie Poynter, Danny Jones, Tom Fletcher and Harry Judd are set to take to the stage for an unforgettable outdoor concert. James Penny, from M&B Promotions who is promoting the show said, “We are more ready than ever to unleash the ultimate summer party!

With live music officially back on what could be better than sizzling performances from the feel-good masters of pop McFly! Attendees can expect a full on festival atmosphere with one of the best live bands around!”.

McFly fans prepare to be amazed!

It may be 10 years since the last McFly album ‘Above The Noise’; but the band are back and bigger than ever.

Releasing their sixth studio album ‘Young Dumb Thrills’, the band say it felt like no time had passed between this and 2010’s Above The Noise. With seven UK number-one singles, five top-ten albums, six sell-out tours and ten million records sold worldwide, McFly are without question one of the most significant British pop acts of the twenty-first century.

Since hitting the big time as the youngest band ever to have a debut album go straight to number one – beating The Beatles’ long-standing record – Tom, Danny, Dougie and Harry have become one of our best-loved bands, not to mention major stars in their own right.

McFly fans everywhere have been desperate to see their favourite band be back on stage together and the band have announced a series of one-off outdoor shows ahead of their UK tour.

This live show promises to be a spectacular experience. McFly will play their best-loved mega-hits such as All About You, Obviously, Star Girl, One for the Radio and Shine a Light. They will showcase their amazing musicianship, showmanship and humour and a surprise or two along the way. Fans can also expect tracks from new album ‘Young Dumb Thrills’. Debut single ‘Happiness’.

Get your tickets now!

Along with a star-studded program packed with hits, M&B’s world-class staging will include dazzling light effects, atmospheric lasers and breath-taking pyrotechnics, putting all music fans right at the heart of the action.

The festival vibe continues away from the excitement of the stage as Lincolnshire Showground is set to be transformed into a buzzing revellers’ paradise, with an array of street food stalls and cocktail bars. You won’t want to be anywhere else!